Disclaimer: I received an entry into the La Jolla Half Marathon as part of being a BibRave Pro. Learn more about becoming a BibRave Pro (ambassador), and check out BibRave.com to review, find, and write race reviews! All opinions are my own.

That’s right. You read correctly. I just ran my 13th half marathon and it just happened to be on one of the most challenging courses I’ve ever run – oh lucky number 13. If you didn’t know, I was pretty nervous heading into the half. I pushed myself into not running too much during taper week, which I think I succeeded more or less. I logged 8.6 miles going into the race and with the race, I totaled 21.7 miles this week. Not bad at all. I will definitely have to increase my mileage starting in June when I start training for Chicago though. Ack!

Anyway, here’s my race report on the La Jolla Half marathon. *Spoiler alert* I am actually considering running this one again next year. 🙂

Expo – The Expo was held in Del Mar at the Hilton hotel right next to the start line. It was nice that it gave people from out of town an idea of where to go for the start. I dropped by Saturday afternoon and the expo was packed. I picked up my bib, my shirt, and browsed the vendors. The San Diego Craft Classic was there promoting their July race. Run for beer anyone? They even had free beer at their table. LOL. Also, got to try a phenomenal acai bowl from Sambazon. That was probably my favorite vendor of the day. Also saw vendors from Nuun, CycleBar, KT tape, and a few other companies.

Night before race – You know how you tell yourself that you’re going to go to bed by a certain time and then it doesn’t happen? Yeah. I planned to head to bed at 9 pm so I could get 7 hours of sleep, but I actually went to bed closer to 11 pm, which meant that I only had 5 hours of sleep. Eek! Considering that I hadn’t been sleeping well that week, I was really nervous about how I’d do during the race. Sleep is so important the week of your race and I managed to scrape by with the bare minimum. Morning of race – Woke up before my alarm hit 4 am. My body always seems to know when I need to wake up the morning of races. If only it did that everyday. Grabbed all of my gear and headed out the door. Got to the finish line by 5 am and took the shuttle to the start line. (They sent out emails saying that we must be in line to board a shuttle by no later than 5:30 am so I panicked and got there early). To anyone running this in the future, DO NOT GET TO THE FINISH LINE AS EARLY AS ME. I ended up on the first shuttle that actually left for the start line, which meant that I got up way too early for the race. I ended up waiting 2 hours for the actual start of the race. Sigh. Luckily, I met up with a lot of people during this time. Met some people from Twitter and had friends running it too! 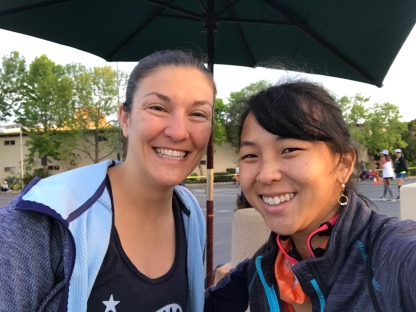 My friend Nicole, who is a race guard for various races in San Diego. 🙂

My friend Amanda who is completing the Triple Crown Challenge this year! Go Amanda!

Race time – I was in wave 4, which was the same wave I was in 2 years ago. When I signed up this year, I put a pretty conservative time down for myself: 2 hours and 10 minutes. I figured I’d be right around there. I know I’ve improved since then, but since this course is super hilly, I didn’t want to chance it. Only when I got to wave 4 did I realize my mistake. I had planned on following the 2:00 pacer this race so to conserve energy, only there was no 2:00 pacer in sight. The 2:10 pacer was in wave 4 meaning that the 2:00 pacer was probably in wave 3. Oops? At that point, I figured I’d just try and keep ahead of the 2:10 pacer and I’d be happy.

Mile 1 to 4: And off we went…just in time for the sun to start coming out. LOL. I clocked my first mile in at 7:40. Oops. The adrenaline of the race definitely got to me. Pacing is something I will need to work on later. At mile 2, we headed up our first hill with an increase of 75 ft for maybe a 1/3rd of a mile. Then, we headed back down and a little before mile 4, we ran on flat pavement for a mile or so before heading up our second hill. This hill lasted a little more than a mile and was more of a pain because we were turning a lot and we couldn’t see the end of the hill. With most turns, we’d just see another hill. Looking back on it now, it definitely foreshadowed our trek up Torrey Pines hill, which has a similar path.

Mile 5 to 8: Mile 5 is where the pep talk started for me. I started taking a lot more deep breaths and tried to conserve my energy as much as possible. At mile 5, we got our glimpse of the massive Torrey Pines hill. We ran downhill and ran by the beach and at mile 5.5, we started our trek up the hill. The highest point of the hill measures in at 445 feet. It does have dips in elevation before it gets to that point, but there are only a few. The first dip we hit was at 318 feet. Although, I didn’t run up the hill in it’s entirety, I am proud to say that I ran up 302 feet of that hill before I had to take a 10 second walking break. This is HUGE because two years ago, I struggled HARD on that hill. The balls of my feet went numb and I had to walk up a lot of that hill. This year, there was none of that and I made it out of that hill feeling like a champ. 🙂 It also helped A LOT that I actually saw the 2:00 pacer a few hundred feet away during this trek. Since the pacer started in the wave ahead of me, that meant that I was on pace to finish within the 2 hours I wanted. That kept me going.

Mile 9 to 11: Having lived in La Jolla for a good chunk of my graduate school career, this stretch felt at home to me. I’ve run around the area for years and I just imagined myself running it like it was any other day.

Mile 13: This mile contains what I heard someone describe as the “F*** you” hill. I think that’s it’s a very accurate description of that hill. The hill increases in elevation by about 150 feet and takes almost everyone by surprise because honestly, who designs a course that has a hill at the very end? LOL. The organizers of the La Jolla Half do. That’s who. Even though it was my second time running it and I knew about it, I still wasn’t well prepared for it. I took one more walking break here and once I hit the peak of that hill, I made a break for the finish line.

Finish line – As soon as I crossed that finish line, I immediately took out my phone and stopped my Strava app. And wouldn’t you know it, I finished it under 2 HOURS! Hooray! I knew I wasn’t going to PR this race, but I wanted to at least redeem myself and redeem myself, I did! 🙂 My official time was 1:59:10 meaning that I beat my course PR by 17 minutes. Holy moly, does that feel good! 😀

I grabbed my medals, all the my goodies (banana, Tru Moo chocolate milk, coconut milk, boxed water, another acai bowl from Sambazon), picked up my gear bag to put all my stuff in, took a photo in front of the La Jolla half marathon sign, and met up with some BibRave Pros who also ran the race. The overall experience was fantastic. It was a challenging race, but it pushed me out of my comfort zone and I came out a stronger person for it. I wish it was a bit cooler and less humid during the race, but that’s weather for you. You can never depend on it when you need it most. LOL. Anyway, that wraps up my race report. Hope you enjoyed reading it! So about how you? Did you run this weekend? Race? How did you do?

Follow A Girl on a Search for Adventure on WordPress.com